Take a map of Barcelona and watch it carefully…which element stands out greatly from the rest? Indeed, the Diagonal:a grand avenue which crosses the city from north to south and not only constitutes an important connection route to the city but delimits even different lifestyles . Thus, one can find apartments for rent in Barcelona located in “upper Diagonal” or “down Diagonal” a very Barcelonan way to tell if you live in uptown or downtown but… what can we find exactly in the Diagonal? Make us a whole circuit through it without losing any detail. 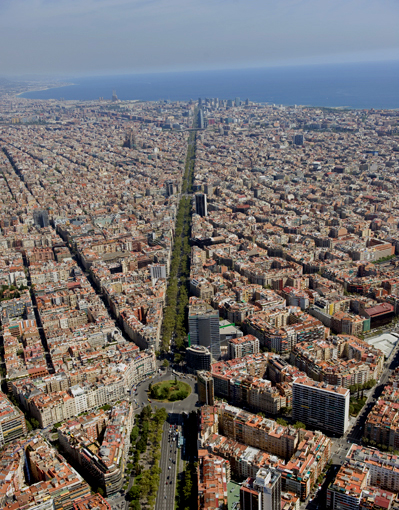 The north area of the Diagonal is the most recognized and it deserves the nickname of uptown. It gathers the classiest neighbor hoods of Barcelona such as Pedralbes, Les Corts and Sarriá.

But not everything is posh style. In the neighbourhood we can also find the university town, the beautiful royal palace and the gardens of Pedralbes, and already near the border with what we might call the middle town, the Francesc Macià square, a stylish square with neoclassic reminiscences that may be considered a border and gateway to the downtown area, the upper area and the most populous southern suburbs of Barcelona.

In the middle of the Diagonal there is a metro station with the same name that leads us into another legendary route: the Paseo de Gracia. Depending if you take this second route to the north or to the south, you’ll end up in the centre of the city and surrounded by luxury shops or in the neighbourhood of the same name: Gracia, where the manners and the desire to live the street can be breath everywhere.

A little further down, where the towers of the famous SagradaFamilia look out, we find monumental buildings as the Sayrach House, the beautiful mansion called Casa de les Puntxes (skewers, for its more than obvious physiognomy) and other great examples of the best modernism.

Finally, in this area we will end on Paseo de Sant Joan, which leads to the Arc de Triomf, and around the newly renewedGlòries square, with the Monumental bullring, the MercatdelsEncants and the futuristic DHUB as the most noteworthy elements.

If living in the upper Diagonal was more like a privilege, today living in theDown Diagonal is not least thanks to the social and urban restructuring that this area has experienced, and which goes from the Glòries square to the Mediterranean Sea, with the Fòrumas the culmination point.

This area, known as 22@ is a real hotbed of technology and modernity. The Agbar Tower presides over this change from the heights, which is followed by modern towers of sophisticated apartments that end in the enclosure that housed the 2004 Forum of Cultures, a world exhibition space that served to push the area and to reconvert an impoverished and almost forgotten neighbourhood into the exclusive place that it  is today.