Tata Bolt was first seen at the Delhi Auto Expo 2014. Unveiled along with the Tata Zest, the Bolt comes at a time when Tata Motors had had a launch for four years. The Zest had received around 10,000 bookings in the first few weeks. The Bolt is yet to see the light but has Tata got a car that will help the automaker reclaim its position in the market again? Let us find out all about the Bolt.

The Bolt has been developed using a new ‘DesignNext’ styling based on Tata’s X1 platform. The Zest is already built on the same platform. The Bolt comes with a little power bulge on the bonnet. Alsp adding to the appeal is the new projector headlamps. Chrome has been used luxuriantly. The Tata trademark, vertically stacked tail lamps are replaced by a more modern one. The external design of Bolt hatchback is more aerodynamic now. 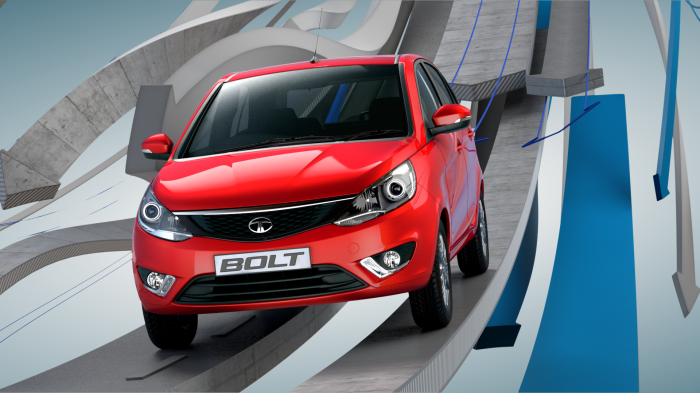 The Bolt comes with a MapMyIndia GPS, new HARMAN infotainment system and a five-inch touch screen display with support for voice recognition, Bluetooth, as well as a smart phone and social media integration. The Bolt gets a new EPAS with active return function speed-sensitive power steering, the first in its segment. It also gets an electric power steering, a trip computer, power windows, power mirrors, parking sensor, climate control and in-built HVAC controls, projector headlamps and LED tail lamps. The other features include a 3 spoke steering wheel, on door release handles and the detailed air vents. The cabin is quite spacious and has enough space for five adults.

Better safety features can be expected in the cabin of the Bolt with ABS, EBD and power assisted steering with active return system developed by ZF.

The Bolt is expected to have both petrol and engine options. The petrol engine is a 4 cylinder 1.2 liter Revotron turbo mill which can generate power of 84 bhp at 5000 rpm and a torque of 140 Nm of 1750-3500 rpm. The diesel engine is a 1.3 liter Quadrajet unit that has been sourced from Fiat with an output of 90 bhp at 4,000 rpm and 200 Nm of torque available and coupled to a new five-speed automated manual transmission. The first of the Tata cars to see the AMT is the Bolt. The Tata Bolt is expected to come in four petrol and three diesel variants. The petrol give mileages of 17 kmpl while the diesel variant gives an economy of 22 kmpl.

The Tata Bolt Price is  Rs. 4.2 to Rs. 7 lakh range. The Swift, the Swift Dzire, Chevrolet Sail, VW Polo, Hyundai Grand i10, Honda Amaze and the Hyundai Xcent are going to give a stiff competition when the Bolt is launched.

For information on Bikes in India log on to – http://bikeportal.in/